In order to become employed in a job that requires language skills, your CV ought to detail all of your qualifications and experience, not just your ability with things like translating and interpreting. Ideally, your CV will point out your individual language abilities whilst also drawing sufficient attention to any transferable skills that you might possess. Use the following CV example with language skills to ensure that all of the things expected by modern employers are included within your document. This sample will also assist with the layout so you can be sure that your CV is formatted in a visually engaging way. 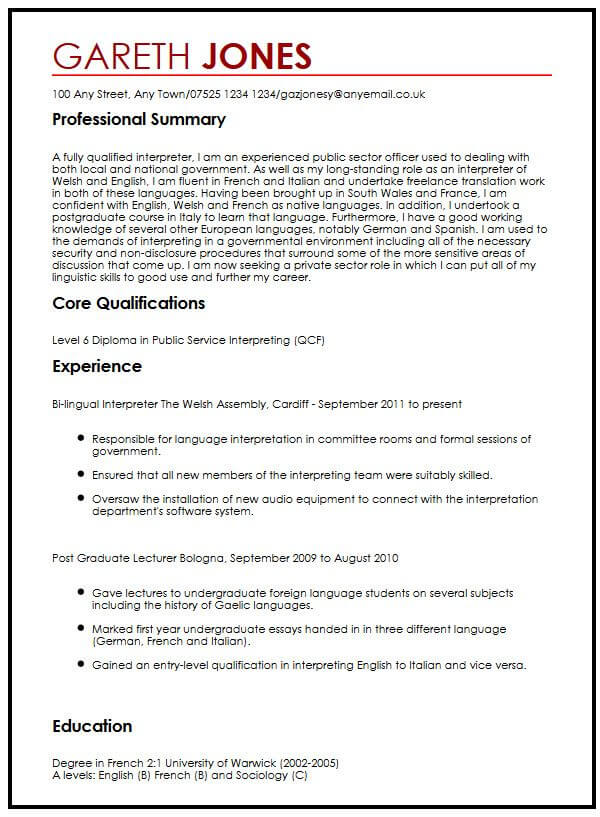 A fully qualified interpreter, I am an experienced public sector officer used to dealing with both local and national government. As well as my long-standing role as an interpreter of Welsh and English, I am fluent in French and Italian and undertake freelance translation work in both of these languages. Having been brought up in South Wales and France, I am confident with English, Welsh and French as native languages. In addition, I undertook a postgraduate course in Italy to learn that language. Furthermore, I have a good working knowledge of several other European languages, notably German and Spanish. I am used to the demands of interpreting in a governmental environment including all of the necessary security and non-disclosure procedures that surround some of the more sensitive areas of discussion that come up. I am now seeking a private sector role in which I can put all of my linguistic skills to good use and further my career.

This CV example with language skills is not the only one available to make use of. Numerous CV samples, each of which could be used as a template, can be found on this site. Anyone looking for new employment opportunities should look at our other tools and CV builder for extra guidance.