Whether you are looking for a job or trying to get accepted into a sought-after college or university course, it is vital to write a CV that makes the most of all the experience that you have gained in your life so far and is tailored to your specific skills-set. Learning how to present the transferable skills and experienced gained during a gap year, for example, could help you land the job of your dreams. Use our free CV example with gap year to gain an idea of a suitable CV format, such as what to include and what to leave out.

Create This CVSee all templates 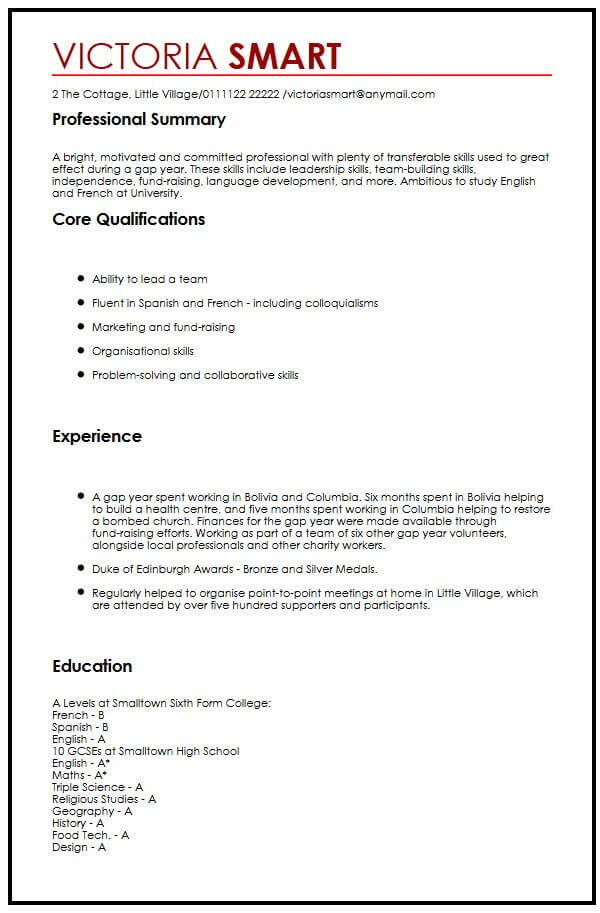 Build a professional CV that gets you hired.

A bright, motivated and committed professional with plenty of transferable skills used to great effect during a gap year. These skills include leadership skills, team-building skills, independence, fund-raising, language development, and more. Ambitious to study English and French at University.

This CV example with a gap year is just one of numerous examples that can help you to create a CV tailored to your situation, whether you've taken a gap year between A Levels and University or for another reason, such as having a baby or illness. Jobseekers are recommended to try our free tools and CV builder also on our website for more useful tips and tricks that could help you to land the job of your dreams.